The disappointing news that Drax will not be appearing at MCM London next week has resulted in a lot of upset punters. Plenty of people had booked tickets (some also booking travel and accommodation) to see one of the headline guests, so understandably they aren’t too impressed. But fear not – there are tons of awesome guests from comics, TV and film who you can still meet. Here’s my top five guests who I recommend you seek out; just try not to get in the queue before me cos I have a Comic Village table to run too.

The first person I’ll be seeking out is the delectable Katherine Isabelle. I’m a huge fan of hers and consider her to be the definitive modern day scream queen. Ginger Snaps is a new classic in terms of horror and Katherine’s role as Ginger in all three movies is outstanding. Despite my love of those movies, its American Mary that is the stand out from her career for me. An absolute masterpiece of horror film making with a leading lady cast to perfection. That’s not to mention her stand out role in Hannibal, as well as tons of other movie appearances….yeah I’m going full on fan boy here! I’ll be getting an autograph and gifting her a copy of Heads! for sure.

Over in Comics Village (which is where you’ll find my table) comics artist Amanda Conner will be appearing. Her work on Harley Quinn is outstanding and I totally fell in love with her art following that title. There’s so much going on in her panels yet it never feels overworked or cluttered – I’m in awe of her ability to give so much life to her comics. Her husband, comics writer Jimmy Palmiotti, is also appearing at Comic Village.

Any B-Movie fan worth their salts will be clambering over themselves to meet Linnea Quigley. Best known for her role as Trash in Return of the Living Dead, Linnea has had a long career in all kinds of horror scream-fests. My favourite piece of trivia about Linnea is that she features as a ‘soul’ crying out of Freddy’s chest in A Nightmare on Elm Street 4. Trash featured in two of the Unfortunate Tales comic strips I have drawn for Attack From Planet B, so I am hoping to meet Linnea and show her what we did with the character.

The man in black, writer, artist, creator; love him or hate him Frank Miller is an institution when it comes to comics. With headline comic titles to his name, Frank Miller is definitely on my list of guests to meet. This is the man responsible for Sin City and 300 among many others; iconic opuses that have helped define comics beyond the superhero genre. As influences go, he sits alongside the likes of the mighty Alan Moore in respect of kicking comics in new directions and allowing traditionally non-comics readers to appreciate the medium with a fresh outlook.

The mighty John Romita Jr is joining Comics Village as well! I love Romita’s art style and am honoured to be sharing a convention hall with this guy. I’m a massive fan of his work on World War Hulk, and his art on Kick Ass is also fantastic. If you want to meet an amazing comics art legend you need to make sure you swing by and seek him out. 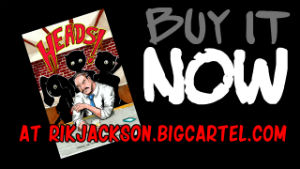