This time last year I was happily relaxing after successfully running Wimbledon Comic Art Festival. That event actually marked the start of 12 months of comic awesomeness for me. Here’s what I managed to get up to in that year.

Running this event was a big deal for me and I was so pleased that it went so well. I’d wanted to put on an indie comics event in Wimbledon for ages, so to have twenty amazing creators tabling at my event was humbling. Hosted at Merton Art Space, I secured the venue by exciting the Head of Libraries and Heritage in Merton with my plans for the day and I even managed to convince the Deputy Mayor to open it with me. I tried my best to mix the content up so that newbies to comics could come and discover that its not all just about muscles and spandex. David Broughton kept the 2000AD crowd happy, Matt Garvey had something for everyone, Gareth Hopkins introduced people to abstract comics, Inko and Vam Nim represented manga, Richy Chandler had some wonderful kids comics and the Awesome Comics Podcast extolled the virtues of all things indie. It was knackering, but I loved it! 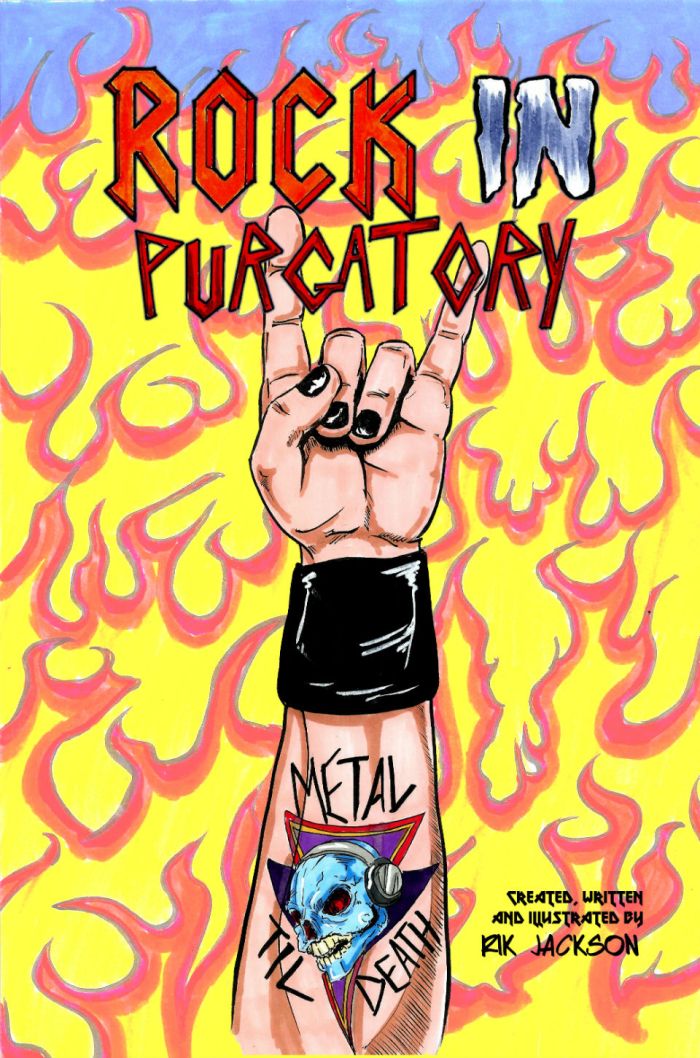 I was trying to launch Rock In Purgatory at the same time as running WCAF, so understandably I couldn’t manage both. In the end, I released Rock In Purgatory in spring 2018, pleasing its fans by collecting the horror comedy strip as a parody music magazine. I threw in a poster pull out, fake gig ads, instrument endorsements and articles about the bands that inspired the strip. At 48 pages, this is not just my debut solo comic release but also the biggest thing I have created to date. I’m really pleased with this comic and was ecstatic when it sold out at MCM this year (more on that later).

Proving that networking works, be it online or face to face, in the wake of Rock In Purgatory finishing its run in Popcorn Horror, I was asked by Ken Wynne of Attack From Planet B to take on art duties for his webcomic Unfortunate Tales From Planet B. Each strip features a re-working of a classic VHS horror movie scene, but with little links which take you from one strip to the next. Even I’m not sure where Ken is taking this narrative, but its been an absolute pleasure so far to draw loads of garish horror comics!

Having ruminated on Heads! for nearly two years I finally took the plunge and began drawing my first issue based series as soon as WCAF was over. My plan had been to be able to release issues in farily quick succession by indie standards, which was quite a goal to set for myself. As with Rock In Purgatory, Heads! is created, written and illustrated by me. That includes colours. And editing. And lettering. And compiling for print. And marketing. So I changed my creation process to see what I could do to speed things up without compromising on quality. The distinct difference with Heads! is that I create the pages at actual size, so the only editing I do is to correct a mistake if I find one. It means I can carry pages around with me anywhere, as I’m working on A4 britsol board. I can draw pages anywhere and anytime. And with the scale being 1:1 there is less to draw. I’ve had to adapt to that the most, as some of my page layouts have slightly less panels than I would put in if I was drawing detail at a larger scale, but its actually helping me get better at the amount of detail I can put into a panel.

Issue one was released in September 2018, but by this point I had already completed the art in issue two and had begun to draw issue three. Ideally, I would have loved to have had three issues fully drawn inside of a year, but life gets in the way sometimes. However, I’m proud of the fact that I’ve achieved two and a half issues in a year, which means I can still release three issues within a year. Hopefully by then the next two and a half will be ready so that I can keep up the regularity.

I closed of my year of comics by tabling at MCM London for the first time. It was a great experience and I’ll be back next year for sure. I officially launched Heads! to the masses at the event and loved being able to get people as excited about as I am. If you are interested in reading more about that event read my previous blog about it.

Now I’m heading into a new period of comic creation and promotion. Besides Heads! issues two and three plus loads more events, I have new projects that I want to get started with. Will I achieve more in the next twelve months than in the last? Stay tuned to find out….